The Mainville Sportsmen’s Club holds various bench rest shoots throughout the year as part of our affiliation with the International Benchrest Shooters and have been doing so since 1973. We presently have ranges set at 100, 200, and 300 yards.

The Benchrest community is best known as the people who shoot little groups. Though this is only one type of competition we conduct, it is the one all others are related to. While competition guns are specially built, every firearm is judged by its ability to group shots at one time or another. This is a game requiring precision and repeat-ability. A gun must consistently place shots into a small area to be competitive. The shooter has to read range conditions and adjust the point of aim to compensate for variables. Most modern varmint guns will outperform their operator and this is the challenge of shooting small groups! Tuning your gun, learning to read the wind, and adjusting for range variables all contribute to an interesting day at a match. The group placement on the target isn’t scored. It is the size of the group that’s important. Simply put them all “through the same hole”.

Groups are shot in traditional Benchrest matches as well as Pistol Benchrest. Five-shot groups are fired in Varmint matches and 10 shots are the norm in Heavy Bench. Groups are scored by measuring the distance between the centers of the two shots farthest apart on the target. Matches are held at 100, 200 and 300 yards or meters. Five-shot matches are 7 minutes long and 10-shot matches last 12 minutes. The target is divided horizontally into a record target, the upper half, and a sighter target, the lower half. You may fire as many, or as few, shots as you want on the sighter but be sure to get the required number on your record before the cease-fire. Moving backers, paper sheets placed behind each target, constantly traverse the record target. These move at a speed great enough to separate each shot from the others. The target crew, and the referees if necessary, will check backers for the required number of shots. A “warm up match” and 5 record matches make up an aggregate. The record matches are scored then averaged to compile your “AGG”. The competitor with the smallest average wins. This format furthers the need to be consistent, though you can always “shoot a little one” and lower your average. Many shooters feel this is one of group shooting’s strong points. A poorly shot match can always be followed be a great one, allowing for a comeback.

Many of our group events involve shooting multiple classes and multiple yardages. Each class and distance is scored separately then combined. Relating all the events fired to “minute of angle” measurements then averaging the scores does this. Each class and then all classes and distances combined are recognized for awards. A shooter doesn’t have to fire in all the aggregates of any event. You are free to choose any single class, yardage, or any combination at any of our events. The only requirement is a gun that conforms to the rules for that class. Matches are held in all regions of the U.S. as well as in several locations around the world. The match schedule runs so that you may be firing in the summer heat of Florida or in the frigid winter leagues of upstate New York. Since the ability to adapt to changing conditions is one of Benchrest’s hallmarks, there isn’t much that will cancel a match.

Our range is probably better known throughout the U.S. then it is by local shooters. We have held some of the largest matches shot in the U.S. at the club.

We have had shooters from all over the world attend matches at our range throughout the years. Germany, Saudi Arabia, Hawaii, Greenland, Canada, France, and England are some of the countries represented at our matches in past years.

Each year we apply for a certain number of shoot dates. During those dates the club’s range is closed for the matches.

If anyone is interested in Benchrest Shooting the best way to get info is to click on the International Benchrest Shooters Website www.internationalbenchrest.com all the rules and regulations are listed there, and also much more information.

A safety meeting is held at 9:30 a.m. before the shooting begins, which is normally at about 10:00 a.m. We have a drawing for one door prize, and oftentimes two. Coffee and Donuts are served in the morning while a hot meal is set out for dinner. 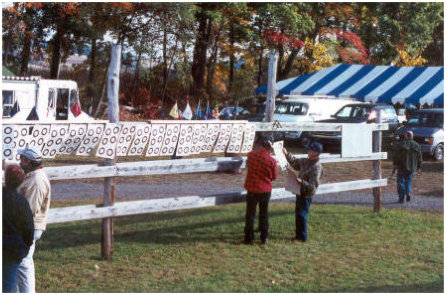 See the calendar at https://www.mainvillesportsmensclub.org/calendar/ for this year’s dates.

During IBS shoots, only the rifle range is closed for the duration of the shoot.  All other parts of the Club remain open.